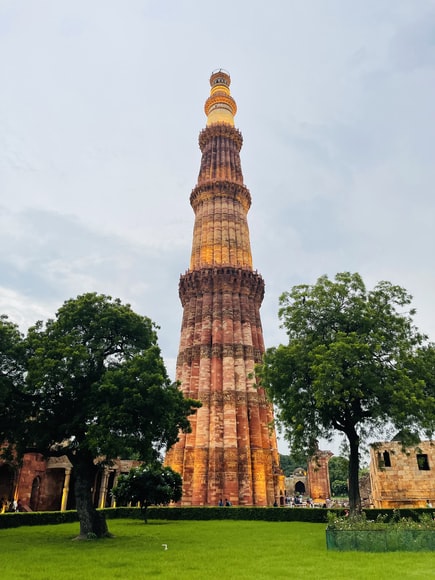 The Qutub Minar, also spelled as Qutb Minar and Qutab Minar, is a minaret and “victory tower” that forms part of the Qutb complex. It is a UNESCO World Heritage Site in the Mehrauli area of South Delhi, India. It is one of most visited tourist spots in the city due to it being one of the earliest that survives in the Indian subcontinent. It can be compared to the 62-metre all-brick Minaret of Jam in Afghanistan, of c. 1190, which was constructed a decade or so before the probable start of the Delhi tower. The surfaces of both are elaborately decorated with inscriptions and geometric patterns. The Qutb Minar has a shaft that is fluted with “superb stalactite bracketing under the balconies” at the top of each stage. In general, minarets were slow to be used in India and are often detached from the main mosque where they exist.